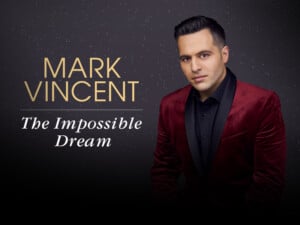 The next five years were filled with successful tours, record-breaking sales, chart-topping recordings, and recognition from his peers and the public.  Mark Vincent is one of Australia’s most beloved tenors.  Now, only in his mid-twenties, he has already recorded and released nine albums on the Sony label, with eight of these albums having reached #1 on the ARIA Classical Crossover charts, and several releases having enjoyed great success atop the Aria national charts, an extraordinary feat.

In 2014, Mark Vincent made his musical theatre debut in the Australian national production of Dirty Dancing. His performances garnered great reviews for his role of Billy.

In June 2016, Dame Julie Andrews, DBE directed the Australian national production of My Fair Lady, which she personally cast Mark in the role of Freddy Einsfeld Hill.

True to following his heart, in 2017, Mark, together with his producer Chong Lim, created A Tribute to Mario Lanza,  containing the groundbreaking ‘virtual duet’ of “Because You’re Mine” together with the Hollywood legend.  The ‘duet’ made headlines and received the blessings of Mario Lanza’s Family and daughter, Ellisa Lanza Bregman, who gave full permission for the re-recording of the ‘virtual duet’ and said, “I’m pleased to allow my father’s recorded voice to be joined on this historic recording by this exciting young tenor, Mark Vincent.”

Mark concluded with a national headline tour of Australia, followed by a sold-out tour of the United Kingdom, as a special guest of world-renowned soprano, Katherine Jenkins. Performing iconic venues including, The Royal Albert Hall London and the Royal Concert Hall Glasgow.

2018 saw Mark performing in Ireland for a select series of performances with Irish tenor Tommy Flemming.  Mark also celebrated the release of his first Christmas album, The Most Wonderful Time Of The Year.

Mark has been a constant regular of Carols in the Domain, which takes place in Sydney and draws an audience of up to 80,000 people and is broadcast nationally by the Seven network.

In September 2019 Mark performed as a special guest of Katherine Jenkins in the historic Roman castle, (Catello Orsini-Odescalchi). Another great highlight of 2019 was being invited to Belfast, Ireland, to perform at the BBC Proms In the Park as a special guest of Britain’s Got Talent and multimillion-selling recording artist, Susan Boyle. 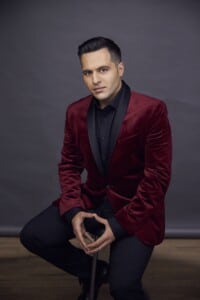